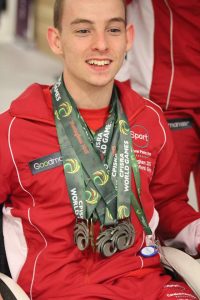 The best thing for me about Mansfield Swimming Club is how friendly and competitive everyone is, I really enjoy the atmosphere when everybody is at a competition.

My greatest achievement in swimming so far has to be competing for England at the Cerebral Palsy World Games in 2015. I was really excited to swim my first international and I managed to get a personal best in every heat and final for all six of my events!

What I love about swimming is the freedom water gives me to move around and do things that I can’t do exercising on land.

My swimming hero is six time Paralympic champion Sascha Kindred. This is because of all that he has achieved during his swimming career and it is something that I wish to emulate with my own swimming. 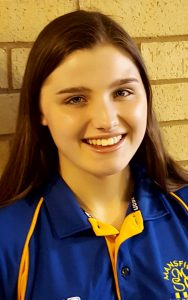 I have been at the club since I was 5 years old. I have always loved trying my best in order to achieve as much as I could as a swimmer. I have always pushed myself hard in training and listened to the advice the coaches give me. I have always found Mansfield to be a friendly club and they have helped me become a level 1 coach and I have been a club captain for the last three years.

I have always done many sports but my passions have always been Swimming and Irish dancing. They have helped me achieve over the years and seem to compliment each other ensuring I have a good fitness level.

My biggest achievement is in the dancing world where I became British Champion in my age group in October 2017. In swimming I have competed in the Midland championships numerous times. 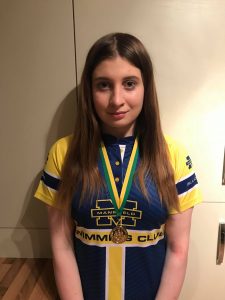 So I wasn’t always friends with the water, up until I was ten I would scream and cry when I had to jump into the shallow end of the pool just in case I didn’t come back up, but as we know now I’m the complete opposite.

My first competition was a regional one in 2014, my times where definitely not the best and I was clueless through the whole thing, somehow I came 1st in my age category which was definitely a confidence booster.

After just competing in nationals the December before, I was nervous. By the end I came out with 21 medals and a spot on the England talent program.

Due to medical problems, I more or less had a year and a half out of competing but in 2017, I was ready to come back and be better then ever before.  With a uneasy start in the West Midlands regionals, nationals was the one which was one I was determined to do well, I came 4th overall in all my races except one which i got a bronze in the 400m freestyle.

With the swim season of 2018 already here, I have 3 golds and hoping to collect more this year. I’ve also qualified for 4 races at the World Series in Sheffield this may.

I can’t wait to train harder and swim faster then ever before in my future.